Bikeyface took a bike-cation somewhere near Boston, but could have been visiting Northfield instead.  Doesn’t that look like MN Trunk Highway 3 through downtown Northfield?

What would a bike-cation in Northfield look like? There’s a surprising amount to do on a bicycle in Northfield, but navigating through the center of town on a bicycle to reach some of the best bikable bits does look a lot like Bikeyface’s drawing.

Bike-cation in Northfield, Plan A

Stay downtown at the Archer House River Inn.  Riding south on Division Street, you can enjoy the shops, restaurants with an easy connection through Riverside Park under the highway to the Peggy Prowe Pedestrian Bridge (Peggy Prowe is Northfield’s tireless trail advocate).

Once there, you can ride on the Mill Towns Trail through Sechler Park toward Dundas. In the future, the plan is to connect the Mill Towns Trail to the Sakatah Singing Hills Trail toward Faribault and Mankato and to the Cannon Valley Trail to Red Wing. In the nearer future, after reaching Dundas on the west side of the Cannon River you could return to Northfield on the trail under construction on the east side of the river. Babcock Park could soon see a canoe/kayak launch and other improvements to diversify your active vacation.

Reaching Carleton College is a short (uphill) ride from downtown with connections to rural roads (paved and gravel).  Visiting St Olaf College (or the Ole Store Cafe) requires something like the Bikeyface crossing experience at Highway 3 (but Northfield does have beg buttons and, at Second Street, a bike sensor) and a longer uphill climb (but returning to downtown is a breeze!).

You could come to Northfield for bike related events, too.  The annual Defeat of Jesse James Days Bike Tour is the longest running and largest one, but the Tour De Save and MN Gravel Championships are based here. 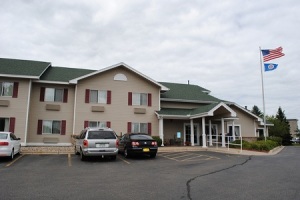 Stay across MN3 at the Country Inn (only .25 miles from the Archer House). You’re not interested in the historic inn experience, but prefer the amenities at a more contemporary hotel (like the indoor pool, for example) along with the convenient parking for your car (with its bike carrier).

Unfortunately, this hotel is stranded at the corner of two state highways, so while it is very accessible by car, all the bicycle activities noted under Plan A take some additional work. The bike and pedestrian bridge which connects to the east river trail or under Highway 3 to downtown still requires crossing MN19.  Reaching downtown (which you could see from your hotel room window) means crossing MN3. The Country Inn is,however, better situated for reaching El Triunfo.

Yep, it was so close to being a brilliant vacation. Small towns need safe streets and infrastructure that takes bikes seriously too. It’s good for recreation, transportation, and tourism. Even if driving is sometimes necessary, it’s always nice to drive less.

Northfield, too, is so close to being a brilliant bike-cation destination.  Pieces of brilliance like the work developing the Mill Towns Trail, building the pedestrian bridge, and working to get the bike sensor installed do add up, but sparkling brilliance requires repairing the border vacuum created by MN3 (and to a lesser extent MN19).

Plus, there are funding challenges since the different agencies and departments which deal with bicycle improvements also bring different funding streams and decision-making processes. The DNR often works through grant-making, MnDOT funds improvements to state roads and MSA-funding, Rice County funds some kinds of improvements in the City, but not others (like sidewalks), the City of Northfield might pay for improvements as special projects, through the CIP, private groups raise money for particular projects and even the federal government can get involved.

There are many stakeholders, too. Northfield has trail supporters, off-road cyclists, bike clubs, BikeNorthfield, as well as youth advocates, healthy community campaigners and probably more.

It’s all one challenge: coordinating support over the time needed to plan and build better crossings takes leadership. None of the recent accolades for livability or retirement mention the stroad through the middle of town, but it is still an impediment to walking and cycling.  Northfield is already a good place to ride a bike and could be a great bike-cation destination (and even better place to live or retire) in the not too distant future if we could connect the dots.

2 responses to “Bike-cation in Northfield”