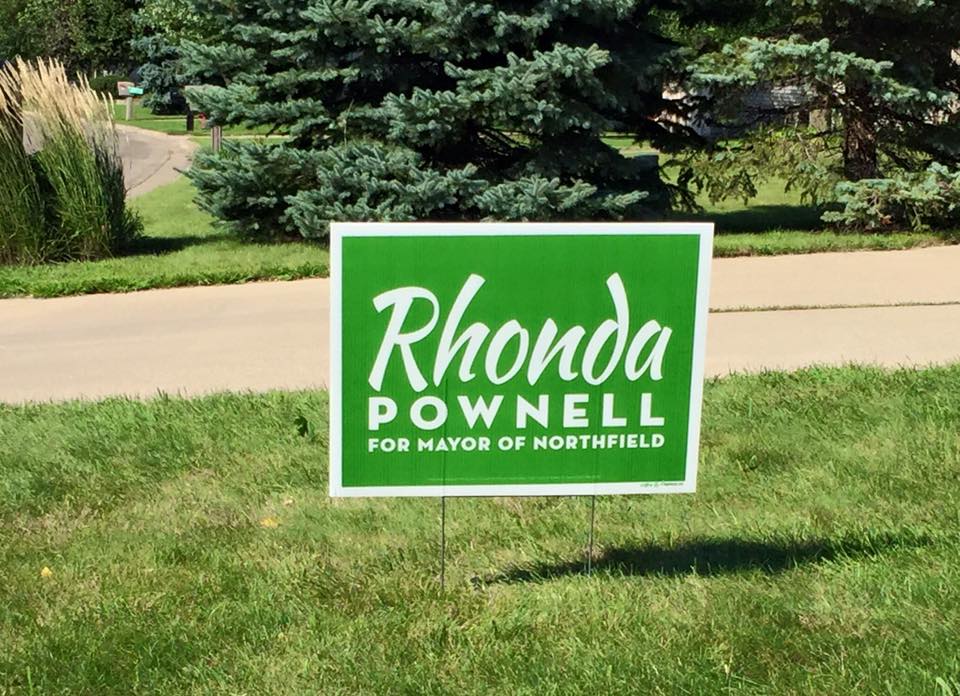 The choice for Mayor this year is both clear and critically important: Rhonda Pownell is the person Northfield needs to lead the Council and the City forward.

I served with Rhonda on the Council for 4 years and worked with her since 2012 as an interested constituent; I am deeply impressed at the leader Rhonda has become. Of her choice to run for Mayor, Rhonda is campaigning on what I’d call a good government platform:

We live in an excellent town, and we are stronger for our diversity and for our commitment to collaboration. But these strengths have not been reflected in our City leadership. Each week, we seem to reach a new low in the quality of our discourse, in our inability to work together.

This is a very respectful way of identifying the failure of our current mayor Dana Graham to lead the Council in an inclusive and effective way. Perhaps you have heard “The Council is dysfunctional”? Council watchers know “the Council” is not dysfunctional at all, but Mr Graham’s “leadership” of attacking those who disagree, encouraging divisiveness and attempting to silence opposition impedes decision making, repels citizens, and frustrates staff. I also worked with Mayor Graham when I chaired the Planning Commission and he served on the Council; I am deeply disappointed that he has failed to learn from his experience as on the Council or as Mayor to lead the City in positive ways.

Rhonda knows the Mayor cannot take action alone, but the Council governs as one body who must work together even when they do not agree. Here’s how I’ve watched Rhonda distinguish herself on the Council:

Assertive, calm and respectful: Rhonda has not only advocated for civility and respectful leadership since she was first seated on the Council, but she has modeled this strength since the beginning. After losing to Mayor Graham in the last mayoral election and being insulted, interrupted, and ignored by the Mayor and some Council members, she has become more assertive, too, calmly reminding the Mayor of the facts of previous decisions, respectfully disputing misleading interpretations and showing her command of the issues as well as her control of her behavior.

Effective and persistent: Much work on the Council happens without fanfare or handwaving, but by listening to constituents and organizations to set priorities, by persisting until information is gathered, by asking staff to bring information to public meetings, and by highlighting constituent issues for staff consideration and council discussion.

Leadership development: Rhonda chose to serve on the Council because of her concern for Northfield, but once elected knew she needed to learn the business of the City and learn to lead. She has spent the last 8 years working with staff and the Council to understand the items on the agenda, but also continually seeking out leadership training and positions. By pursuing one opportunity after another, Rhonda is now the President of the League of Minnesota Cities Board. This position is evidence she has the respect of municipal leaders around the state and she knows the issues facing not just Northfield, but all cities, as well as having the connections to resources to address them.

Past President @Gustie1985 & current @MinnesotaCities President Pownell briefing incoming Board on the work of #LMC pic.twitter.com/Kba9Du58Zs

Dispelling a misconception: some of my liberal friends have asked “But isn’t Rhonda a conservative Christian?” Yes, she is. Rhonda is also a strong, politically moderate leader in non-partisan local government, where she will help the Council attend to the business of the City – streets, water, zoning, public safety, library – equitably and effectively. I believe we will all benefit from her commitment to service and improving the quality of life for all people in Northfield.

Rhonda has a long term vision for Northfield which will is inclusive, compassionate, and prosperous; vote for Rhonda for the leader who can lead by example, by listening and by working together.

The Fine Print: Where and how to vote:

You can start voting TODAY, September 23, 2016! Here are links to all the information about when, where and ways to vote.Please vote! At the local level, only a few votes can decide the election: