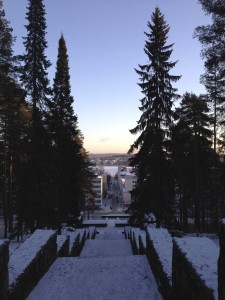 Hyvää Uutta Vuotta from Jyvaskyla, Finland where I’ll be spending the next 6 months or so. Jyvaskyla has about 135,000 people (like Northfield, about 25% of those are students) on about 52 sq. miles in Central Finland.  For landscape, think northern Minnesota.  Lots of birch and pine, many lakes, and usually much snow (but not this year).

Compared to Cambridge, my Michaelmas Term home, with glorious medieval architecture surrounded by Victorian terrace houses mixed with some not very noteworthy contemporary buildings (5 stories is about the maximum; 3 or 4 more likely), Jyvaskyla is a thoroughly modern city of high density high rises (I live on the 7th floor in the center of town).  While Cambridge built stone and brick buildings, Jyvaskyla’s old (19th century) built environment was wood and has now been almost entirely replaced.

Sadly, Jyvaskyla “solved” its traffic congestion problems by running the highway between the city and Jylasjarvi – one of the lakes: “For decades, the problem of through traffic had bothered the people of the town and this was resolved in 1989 with the completion of new Rantaväylä roads along the shoreline of the lake.”  The center of town was pedestrianized, but the lake is now cut off from the city and strolling around it is unpleasant on the highway side. Could be worse, I suppose, and the highway could go right through downtown the way it does in Northfield.  Because the highway blocks access to the lake and new bits of the University of Jyvaskyla, there are underpasses somewhat like the proposed TIGER trail in Northfield to link neighborhoods and the lake.

The other curious piece of Finland planning is the shopping mall – multiple small malls in central Jyvaskyla – in the walkable city center.  I admit, when there are so few hours of daylight (I’m used to the cold), artificially lit insides have some superficial appeal.  But not much.  Timo Hämäläinen blogged about this phenomenon (and summed it up well) which was subsequently picked up by Atlantic Cities; I hope to pick Timo’s brain a bit more in the next month or so.

In the cows, colleges and contentment department, Cambridge beat out Northfield to win my personal Cows and Colleges award.  Jyvaskyla has colleges, but is sadly lacking in cattle.  More from Finland soon.