Recent news about cycling safety (more accurately described as cycling danger) warns cycling deaths are on the rise (…or not).  Reporting on deaths and injury-causing collisions/accidents shapes the public sense of cycling for non-cyclists because these are the numbers we have.

No, I worry about (and just dislike) the common non-injury, non-death interchanges between myself and motorists. Like the man yelling at me for being on the road even though I was in the bike lane at 5th and Division Street or the right-turn-on-redders at 2nd Street and Highway 3 who look left for motor traffic but do not check right for bikes/pedestrians or the drivers on Jefferson Parkway who attempt to squeeze by me despite the median pinching the space (and yelling at me for taking the lane when the median ends and they can pass).  Most cyclists have multiple near misses like these, but they’re not reported as accidents and don’t “become data.”

Enter the Near Miss project which collected about 2,000 first person reports in London recently (numbers being crunched at this time). This joint effort between the University of Westminster (lead by Professor Rachel Aldred) and Blaze Laserlight attempts to document “near misses” and SMIDSYs (Sorry mate, I didn’t see you) in London.

In the USA, Ft. Collins, Colorado has its own “near miss” reporting which it uses “to assess potential conflict points and the frequency of near misses at these locations. Bicycle and pedestrian related crashes are typically under reported and this offers another way to address issues before they result in a crash.”

Northfield has taken two steps toward collecting better information about cycling this year. First, we participated in MnDOT’s bike count to help both the state and Northfield know where the bikes are now and to plan for the future.  Then, BikeNorthfield and the City of Northfield (with the help of many others) applied for Bike Friendly Community status (we got Honorable Mention) which required quantifying the bike infrastructure, policy and other tools in place in Northfield.  Next year, perhaps, Northfield could begin to collect and map near miss information to continue to build the database for better transportation in Northfield. 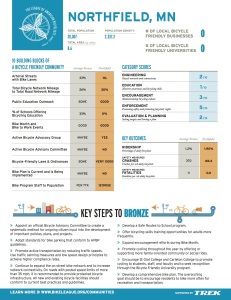