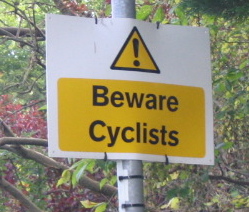 Dorothy Rabinowitz’s video rant about New York City’s bike sharing program may be the most blogged about bit of cycling commentary in recent memory.  Let’s just say her statements mark the extreme view of US cycling where bikes simply do not belong on streets or in cities (and here’s a link to learn about the real bike lobby, not the mythical one Rabinowitz described).  There’s been some more local hoo-ha about cyclists vs. drivers,

In Northfield, we’ve put pretty good policy in place for encouraging cycling and walking, as well as for building sidewalks, bike trails and on-street bike facilities as we take on street projects.  Each new project, however, which tries to build non-automobile facilities continues to meet with resistance from some Council and community members while being  championed by others.

Part of the problem seems to be that in Northfield and New York has nothing to do with the infrastructure, though, but the perception cyclists are some special class of people and, consequently, “they” are sucking up resources that “we” need for other things, like cars.  Perhaps we can stop thinking of cyclists and start thinking of people on bikes, you know, as people like everybody else.  And here’s a little video from a Dutch cyclist who, while visiting the US, observes “the average cyclist in San Francisco seems to be a young fit adult, mostly male and appears to be in a constant hurry” and, unlike Amsterdam, cycling here is recreational, not transportational (and Americans don’t wear “normal clothes”).

For the record, I’m trying to sell my road bikes (the kind one rides in spandex shorts) and keeping my beater bike for riding around town from point A to B in my regular clothes (even skirts), but I’d kind of like one of these.

And here’s a little round-up of other cycling-related stuff which has clustered lately around good infrastructure (and planning infrastructure) and “peak car” – new studies show driving is declining.  Somehow I also fell upon a few older posts about the cost of car ownership (cars from AAA, comparison from NYTimes and a DIY calculator from Bikes at Work and a great new phrase “infrastructurally coerced car ownership” from A New Dallas).