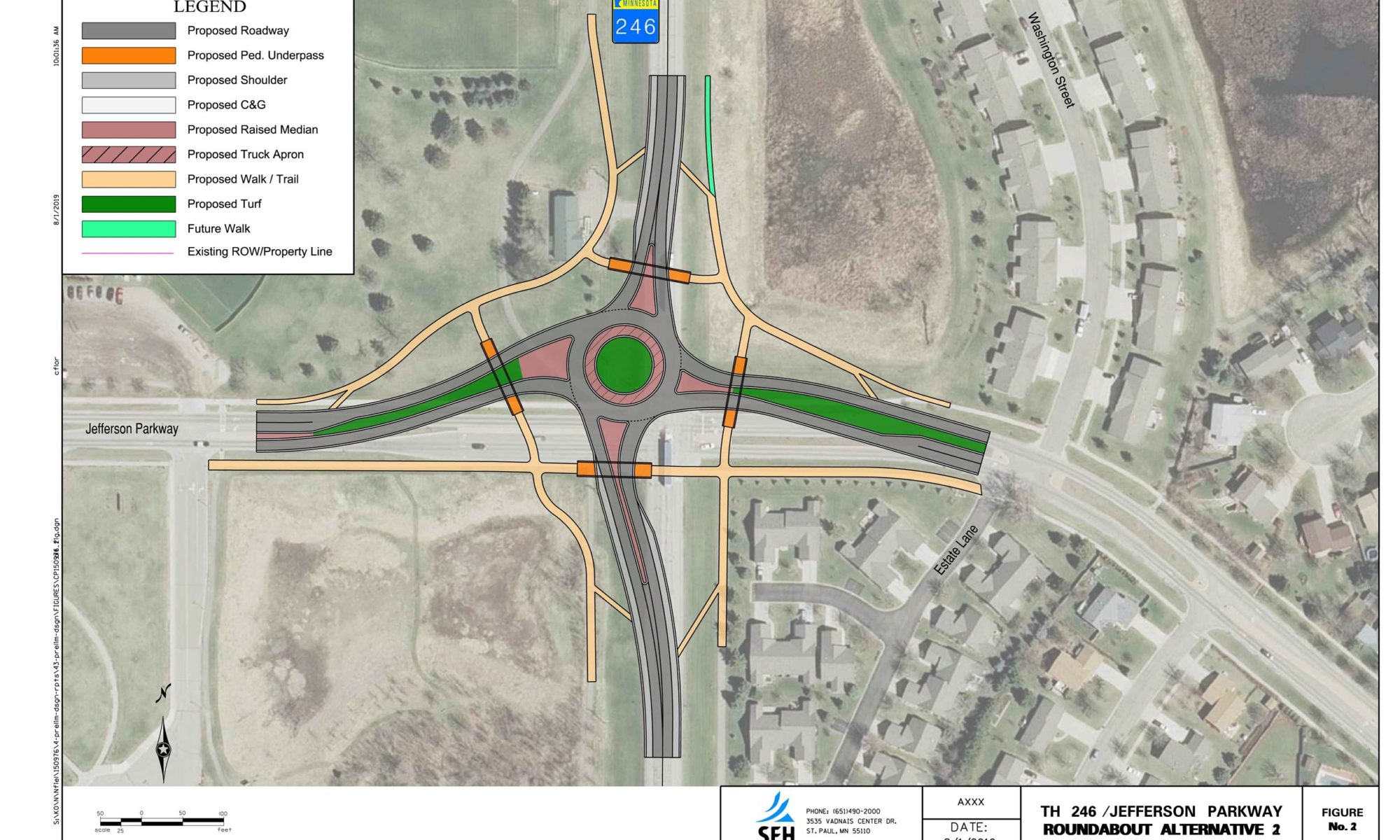 Last week, the Strib ran an article about Northfield’s planned roundabout with tunnels for people biking and walking:

After a bit of back and forth, the exchange ended with:

Aside from the arrogance of this judgment (requiring omniscience to evaluate), there’s really more to be said about why this project, while unfortunate and imperfect, is justifiable.

The Strib corrected their print story to show the the approved design below, rather than the rejected design which brought all the pedestrian tunnels to the center at a sort of below-grade plaza. The adopted version is simpler and allows more direct travel by people riding, rolling and walking:

I agree with these guys. The proposed roundabout plus tunnels is a huge amount of infrastructure with a very high price tag for an intersection with only 4,000 AADT. MnDOT and the City chose the roundabout design early and cut off opportunities to rethink the intersection for people walking, rolling, and riding and for cost savings in the short and long term.

I especially agree with Mr Speck that while roundabouts are the safest and most pedestrian friendly of the car-centric designs, they are still completely auto-centric infrastructure so the opportunity to really change the design paradigm was lost. So, yeah, the Northfield roundabout is a mega-project which violates the walkability rules and urbanism best practices.

But not completely right

Jeff Speck is an expert on walkable places, but how well does he know Northfield? This intersection is a big problem for Northfield because of prior planning problems, the character of the roads involved, Northfield’s nascent understanding of walkability and how to achieve it, and the political climate of the city.

An earlier exchange with many of the same complaints was kicked off by the only other person in the conversation who knows the Northfield landscape and, as a result, can also see the upside:

Northfield is just beginning to walk back the decades of suburban development which reached its apotheosis with the Northfield Middle School. This intersection is smack dab in the middle of this unconnected, residential area with three of Northfield’s five schools, a community center (including a senior center), and a future state trail which will be a major east-west bike/walk connection. And the north-south road is a state highway, just to add some jurisdictional complexity and design constraints.

No other routes to school

Because there are NO other contiguous streets which connect the Middle School and there are two more schools plus the coming into town get-to-work traffic, congestion at this intersection is highly concentrated into “rush minutes” keyed to the school day. School start and end vehicle traffic jam times are the very same times kids might be walking and biking to school (All detailed here).

What traffic looks like now as it heads to the 4-way stop with turn lanes during the school rush. There are multi-use paths and sidewalks leading to this intersection, but crossing the multi-lane all way stop in traffic like this is daunting and dangerous – both actually dangerous (with one person killed crossing on foot and multiple crashes) and certainly subjectively dangerous.

Parents are rightly afraid to let their kids bike or walk through this area now and are also concerned that kids crossing this kind of traffic at a roundabout doesn’t feel safe. Slowing cars and crossing at grade is the urbanist recommendation, but that still doesn’t address the sense that safety is achieved only by making sure people walking and biking are physically separated from heavy traffic. A small bonus – the intersection is already somewhat elevated, so underpass grades will be quite flat.

Older adults and people with mobility or vision challenges are also uncomfortable with crossing traffic lanes and needing to perch on “refuge medians” (surely the word “refuge” suggests being stranded) especially if crosswalks are before vehicles enter the roundabout and traffic is slowing down from 45 or 50 mph and looking left for other vehicles rather than for unprotected people.

The Mill Towns State Trail will also pass through this intersection along Jefferson Parkway. While many riders and walkers on this leg will be able to cross at times which are not during the concentrated school times, the DNR recommendation for trails crossing roadways with these speeds would be a grade separated crossing which, again, is typically perceived as safer and easier for recreational users.

The current 4-way stop doesn’t work well for any mode of travel, but when choosing another intersection control the City was limited by MnDOT requirements for its highway. The intersection does not meet MnDOT warrants for a traffic signal (traffic projections forecast warrants would be met by 2040) for one thing, and MnDOT’s emphasis on traffic flow and Level of Service prioritized easy driving…so, a roundabout was the choice. There is discussion of turning back this route to the county and/or city, but that possible future development will come too late for this project.

The highway has a posted speed limit of 45 mph in front of the middle school as vehicles slow down from the 55 (or maybe 60 as speed limits were raised recently) out of town section:

Building schools on state highways is a bad idea, but Northfield did it anyway three times. So, the school district buses kids across the street to the Middle School because it is a hazardous crossing and the traffic accelerates out of town right about at the Middle School. Slowing traffic should happen well south of the roundabout and maybe, if this becomes a county of city route, there will be more opportunity to do that. But, again, too late for this project.

Back to the roundabout

So, given all the other factors, what should Northfield do right now to improve safety (actual and perceived), fix school traffic jams and encourage small people and older people and recreational trail users to walk and bike through this intersection?

Note the Catch-22: If Northfield could increase the number of students getting to school under their own power that would reduce rush minute congestion created by adults chauffeuring kids to school…and if it reduced demand during peak times then the over-engineered roundabout would not be needed. But how could Northfield increase walking and biking through an intersection where people die?

My position is the roundabout can relieve the traffic jams (and improve air quality by eliminating those idling cars and buses), reduce the number of conflict points for car crashes (of which there are many), and adding tunnels makes the walking and biking not only statistically safe, but safe feeling. Making biking and walking feel safe opens the door to schools encouraging kids to walk and bike (and parents will allow it), gives the Mill Towns Trail an enhanced chance of success by allowing low stress, non-stop travel (just like cars want!).

Mr Speck has decreed it has never worked and will never work, but I’m hopeful that IF the City ensures that there are safe bike and walk routes to the roundabout from all directions (for thinking beyond the project area is always a challenge), then Northfield opens the door to biking and walking as real transportation so that by the time this needs to be reconstructed, the landscape will be different and the next solution will be climate focused instead.

But. I also have deep reservations about this approach. Adding bike and walk facilities, even really good ones, to a system designed for and prioritizing vehicle travel – as this project most certainly does only reinforces the unsustainable design mentality which supports the “drive everywhere” status quo. At this moment in Northfield, it is
what is politically possible, but it dodges the critical issue of reducing driving to save the planet and our health.

I have two desired outcomes for this project beyond getting people riding, rolling and walking safely to all the important destinations near this intersection. First, making this project an object lesson in Northfield’s evolving climate action planning highlighting what not to do in the future. Second, the City and school district will understand this project is a bandaid to fix a series of land use and transportation mistakes which both
jurisdictions will want to endeavor not to repeat. Maybe the very high price tag will focus their attention more sharply.

A quick look at a map of the City shows the wonderful, walkable core, but then how the City sprawled and spread. Northfield did a very thorough job of not merely breaking, but flouting Mr Speck’s walkability rules and we’re just starting to put the town back together. The particular challenges at this critical intersection mean I’m defending the choice to separate the bike and walk trails from the vehicle traffic to help people feel safer while we work on all the other pieces.

After so completely cutting off connectivity in the past, Northfield’s decision to try a big fix at this intersection is defensible, but disappointing.